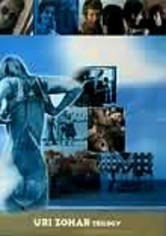 1972 NR 1h 30m DVD
Uri Zohar portrays a new character in each of three episodes set in 1970s Tel Aviv, but one thing stays the same: his zany antics. This time around, Guta (Zohar) owns a concession stand on the beach, though his primary activity is charming the sun-worshipping females. His buddy Eli (Arik Einstein) is a married musician who carries on affairs in Guta's cabana. Little does he know Guta has been spying on him -- and he just might spill the beans.