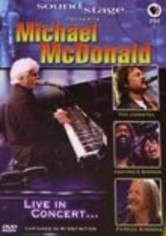 2004 NR 1h 0m DVD
Michael McDonald has had a long and illustrious career, both with the Doobie Brothers and on his own. In this live performance that originally aired on PBS, McDonald is joined by fellow Doobies Tom Johnston and Patrick Simmons to perform hits such as "What a Fool Believes," "Blackwater" and "Taking It to the Streets." Also included are songs from his album commemorating the sound of Motown, such as "Ain't No Mountain High Enough."