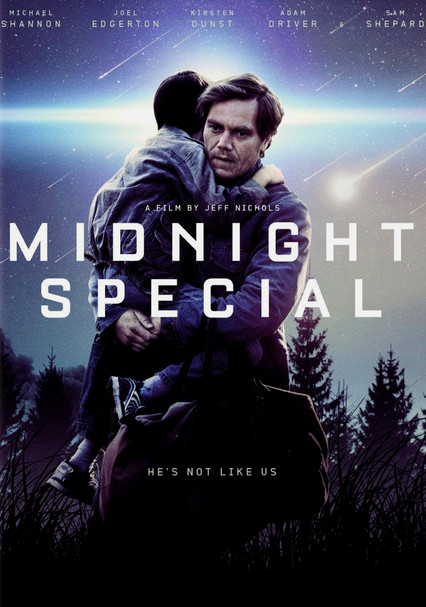 2016 PG-13 1h 51m Blu-ray / DVD
After discovering that his young son possesses extraordinary powers, a father must try to safeguard the boy not only from the intensive pursuit of government authorities but also a band of religious fanatics.

Parents need to know that Midnight Special is a sci-fi drama that writer/director Jeff Nichols made to help process his feelings of becoming a father. Some of the movie's story ideas may seem very familiar, but it's more about emotions than special effects or thrills. That said, there are violent moments and scary effects involving an 8-year-old boy; he's kidnapped and shown with bleeding ears and a bloody nose. There are also very realistic car crashes, guns and shooting, bleeding wounds, and injured bodies. Sex isn't an issue, and language is infrequent but does include one use of "a--hole" and one use of "s--t." Glasses of whisky are poured by not consumed (at least on screen). The movie is thoughtful and emotional, but some story details are left deliberately vague.

Several scenes of guns and shooting, with bloody wounds and characters falling when hit. Scary scenes of destruction, debris falling from the sky, tremors, collapsing rooms, kidnapping, etc., all involving an 8-year-old boy. He has a bloody nose and bleeding ears. A woman is smacked against a wall. A few realistic car crashes. A man is smacked in the head with a lamp. Some sudden, mildly scary visual effects.

The movie is about selflessness and sacrifice, especially on the part of parents for their children. It also subtly addresses the dangers of blind faith/thought.

Mention of Nissan during a radio ad, Isuzu car shown.

One character asks for "a drink." Two drinks are poured (whisky) but not consumed.