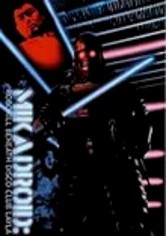 1991 NR 1h 53m DVD
When a nightclub opens in Tokyo 45 years after World War II, the clientele have no idea the site once housed a hush-hush military lab. But the secret is about to emerge as a defective generator reactivates half-man, half-machine superwarrior Mikadroid, long thought destroyed by America's firebombing of the city. Next thing you know, disco patrons are turning up dead as the cyborg prowls the cellar in this sci-fi classic starring Yoriko Douguchi.