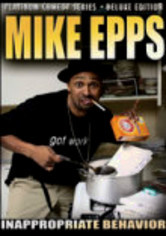 2005 NR 1h 13m DVD
Actor-comedian Mike Epps (Roll Bounce, The Honeymooners), who simultaneously launched his own HBO series "Unsuccessful Thug" while preparing for the lead in a Richard Pryor biopic, nails another career milestone with his first solo stand-up show. Delivering a full hour of hardcore comedy in this hilarious HBS special, Epps makes no apologies for his inappropriate behavior -- after all, it made him a star.