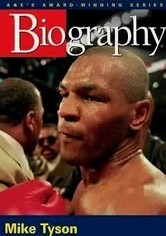 1993 NR 0h 50m DVD
Once the dominant force in heavyweight boxing, Mike Tyson used his fury inside the ring to pummel opponents; sadly, that anger outside the ring led to his undoing. Through interviews with Tyson's boyhood pals, sportswriters and others, this A&E documentary profiles the champ's knockout career and turbulent personal life -- including the rape conviction that sent him to prison. The film also looks at Tyson's efforts to rebuild his life.