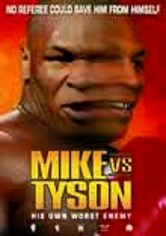 2004 NR 0h 48m DVD
Troubled boxer Mike Tyson was once at the top of his game, earning millions in bout after bout and gaining notoriety as one of the most exciting pugilists ever to hit the ring. But he also seemed to be constantly fighting demons, and before long, this skirmish played itself out on the ropes, tarnishing his image and nearly destroying his career. This insightful documentary charts Tyson's rise and fall via footage, interviews and more.