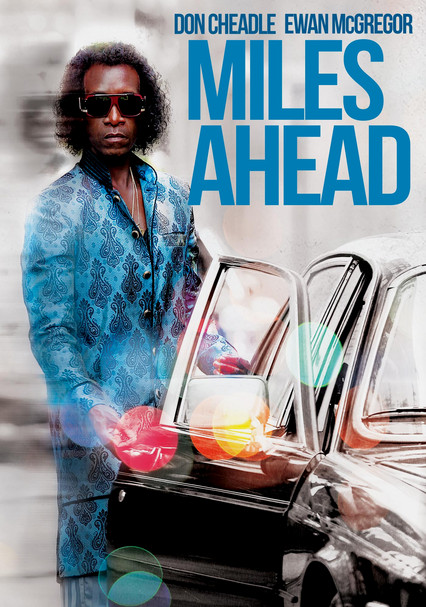 2016 R 1h 40m Blu-ray / DVD
Recounting his emergence from a five-year artistic hiatus, this ambitious biopic chronicles a slice in the life of renowned jazz trumpeter Miles Davis as he tries to recover a recording stolen from his house, aided by a "Rolling Stone" reporter.

Parents need to know that Miles Ahead is a biographical drama about legendary jazz trumpeter/bandleader Miles Davis. Written, directed by, and starring Don Cheadle, the drama flashes back and forth between the final year of Davis' hiatus from the music industry and his career two decades earlier, when he was recording for Columbia Records with Gil Evans, performing with his quintet in New York City, and falling in love with Frances, a dancer. Expect a lot of strong language ("f--k," "s--t," "a--hole"), as well as substance use/abuse (heroin, cocaine, alcohol), partial nudity (bare breasts), a threesome, and some violence (a police attack, domestic abuse, and gun violence) -- all of which makes this movie best for mature teens who already know something about the jazz icon.

Gun violence, domestic violence, and hand-to-hand violence. Miles is shot. Police brutality in a scene in which Miles is unfairly targeted by a racist police officer.

Messages include the need to be faithful and good to your spouse (and the consequences of marital infidelity and domestic abuse) and the power of music. Also explores the way artists must overcome self doubt and greedy alliances to create their art.

Characters snort cocaine, inject heroin, and drink a lot. Miles is often drunk or drinking. Junior needs heroin, and Miles -- in the past -- has experimented with it.