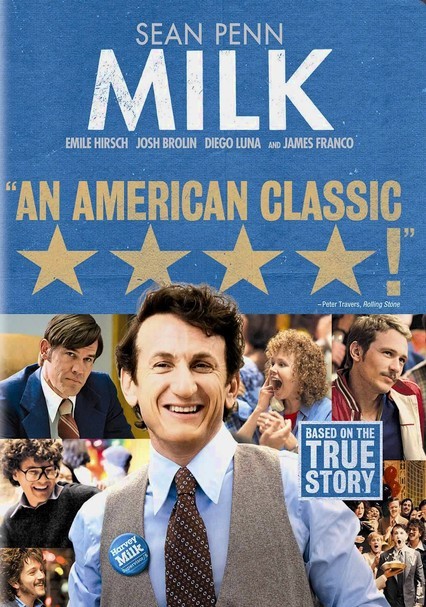 Parents need to know that this intense, stirring drama examines the life of Harvey Milk, a civil- and gay-rights advocate who was assassinated in 1978. It explores prejudice against homosexuals and traces the beginnings of the gay rights movement. The film offers an unflinching look at homophobia during that era. Expect strong language (including "f--k" and "s--t"), sexual situations, partial nudity, political manipulation, suicide, and murder. Some material may be too challenging for younger teens, but older teens and adults will find it a thought-provoking piece of history.

Hook ups between men. Lots of ogling and a fair number of conversations filled with sexual innuendo (including discussion of what one person would "do" to another). Naked photos; a man walks around in his briefs. Men kiss and grope each other.

A man shoots two others, point blank. Another man is beat up in a hate crime. Black-and-white archival footage shows homosexuals being harassed by cops. Also, a man Milk is involved with hangs himself; the scene in which his body is discovered is upsetting and somewhat gruesome.

Milk discovers a sense of purpose when he moves to San Francisco with and becomes an equal-rights advocate. His story gives hope to countless gay men, many of whom are afraid to come out. Milk and his longtime boyfriend appear to have a nurturing, supportive relationship, but when they break up, Milk finds himself embroiled in a highly dysfunctional relationship, which unfortunately ends in suicide. Later, Milk himself is assassinated by a fellow politician. Political intrigue and betrayals are revealed; the assassination plays out in excruciating detail onscreen.

Social drinking, some to the point of inebriation. Some characters are shown rolling marijuana.