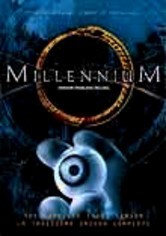 1998 NR 6 discs
After taking to the hills with his family to escape the apocalyptic Blood Plague when a biological weapon was released at the end of the second season, psychic FBI profiler Frank Black (Lance Henriksen) struggles to regain his wits. He soon learns that neither the cataclysm nor the Millennium Group were what they appeared to be in the third (and final) season of this paranormal TV series from "X-Files" creator Chris Carter.