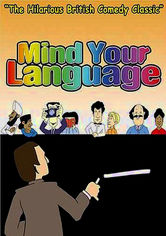 1977 NR 2 seasons
This irreverent, smart sitcom follows English instructor Jeremy Brown (Barry Evans) as he prods a hodgepodge of immigrants with lively tongues and irrepressible speech habits toward a clear, common form of communication. With such students as a Chinese Embassy worker, a Japanese electronics rep, and German and French au pairs, peacekeeping is as demanding as explaining metaphors. But when Brown faces dismissal, they band together to help.

The hilarity continues in these episodes from the 1970s British television comedy. Jeremy Brown (Barry Evans) has his hands full teaching English to a class full of immigrants whose limited English skills often lead to wild misunderstandings. Meanwhile, frosty principal Miss Courtney (Zara Nutley) keeps him on his toes. Included are "The Cheating Game," "Better to Have Loved and Lost," "Hello Sister" and "The Examination."

The miscommunications continue in this 1970s British TV comedy featuring Barry Evans as mild-mannered English teacher Jeremy Brown, who teaches students from around the globe whose shaky English skills often lead to hilarious mix-ups. Zara Nutley plays frosty principal Miss Courtney. Included are "I Belong to Glasgow," "Who Loves Ya Baby?," "No Flowers," "Just the Job," "Represent at Leisure," "The School Fete" and "What a Tangled Web."