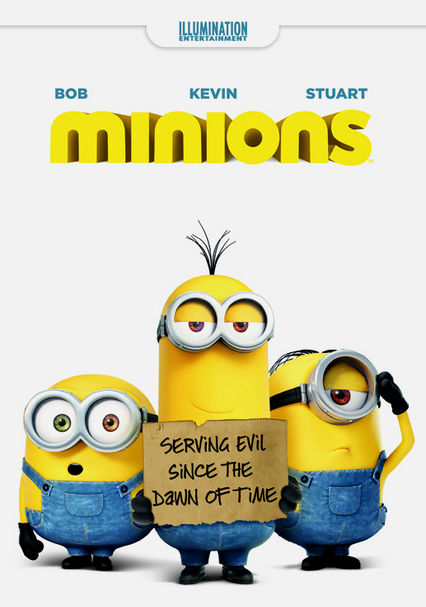 2015 PG 1h 31m Blu-ray / DVD
Born to serve despicable villains, these crazy, yellow second-fiddles have a tragic history of accidentally killing off their masters. Without leadership they will perish, so three Minions head out on a dangerous journey to find their next evil boss.

Parents need to know that Minions is the highly anticipated prequel to the Despicable Me franchise, focusing on Gru's beloved yellow sidekicks. Although no children are in peril in this installment of the franchise, the appeal of villains/bad guys is a central theme, and there are several scenes of cartoon violence that are played lightly/for laughs (explosions, freeze guns, torture devices). The actual "body count" is low and mostly involves the Minions' non-human/bad guy (a T-rex, a yeti, etc.) bosses. The Minions speak a made-up language, but there are a couple uses of insults like "idiot" or "screwed up." And there are some glimpses of basically bare Minion bottom, as well as some other mildly suggestive scenes (implied nakedness after losing a swimsuit, bottom squeezing, a couple embracing, hypnotized guards stripping down to their boxers and dancing/slapping each other on the rear, etc.). One male character dresses as a woman, and at one point the Minions pile on top of each other to disguise themselves as a woman (earning a chest ogle in the process). Like the other Despicable Me movies, the story can be seen as a celebration of villainy (though much of it is intended to be silly/funny) -- but the long-term take away is hopefully more about how loyal the Minions are to one another and to their masters.

Explosions, freeze guns, torture devices, scenes of various "villains" dying in mostly humorous ways -- like a T-rex falling in lava, a general being shot at, a yeti that's killed by an ice block, and several perilous/near-death experiences. A family of robbers uses paint guns to ward off the police (and a water tower is destroyed). One character is a weapons specialist.

It's all intended to be funny/silly, but villainy is celebrated/frequently rewarded. That said, the Minions do exhibit/encourage loyalty and friendship.

Although no products are featured in the movie, the Minions are hugely represented in tie-in merchandise including toys, apparel, games, food, and much more. (In fact, as of the film's release, it was the biggest promotional push in the studio's history.)