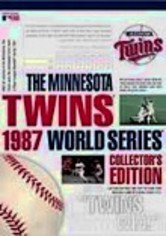 1987 NR 7 discs
Minnesota Twins devotees prove they're some of the most loyal, not to mention raucous, fans ever in this sports chronicle that tracks the baseball team's impressive march toward victory during the 1987 World Series. Viewers can also catch the trophy presentation, the victory parade and glimpses of the Twins' formidable triumph in the American League West division. Also included is an interview with National Baseball Hall of Famer Kirby Puckett.