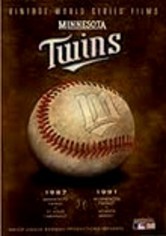 1987 NR 2h 18m DVD
Relive the Minnesota Twins' pair of World Series championships in 1987 and 1991 with this celebratory reel of game clips and rare footage, courtesy of Major League Baseball cameras that captured it all. Highlights include the first World Series game to be played indoors, in the Hubert H. Humphrey Metrodome, and Kirby Puckett's game-winning home run that came through in the 12th inning of a long night, paving the path to victory.