Miracle in the Land of Coffee 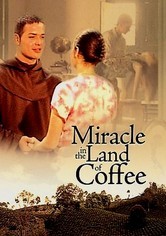 Miracle in the Land of Coffee

2006 NR 1h 29m DVD
Torn between his calling and the woman he loves, a young Franciscan monk faces the ultimate test of faith when his friend is accused of murder. Set in 1930s Colombia, this touching drama follows Felipe as he sacrifices everything to save his friend. Aware that his actions could lead to his own execution, Felipe grapples with loyalty, faith and love in a struggle that permeates the entire village. John William Bedoya and Maribel Hernandez star.