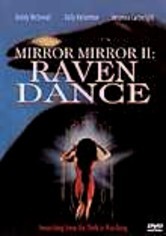 1994 NR 1h 33m DVD
An evil mirror that caused many deaths inside an orphanage has been hidden for years. When a rock band puts on a show nearby and uncovers the deadly mirror, the band members are tortured by the device's demonic powers. Teenage orphan Marlee (Tracy Wells) is glad, because the men were tormenting her brother Jeffrey (Carlton Beener). Now in complete control of the mirror, Marlee decides to use it on her nasty stepsister Roslyn (Sally Kellerman).