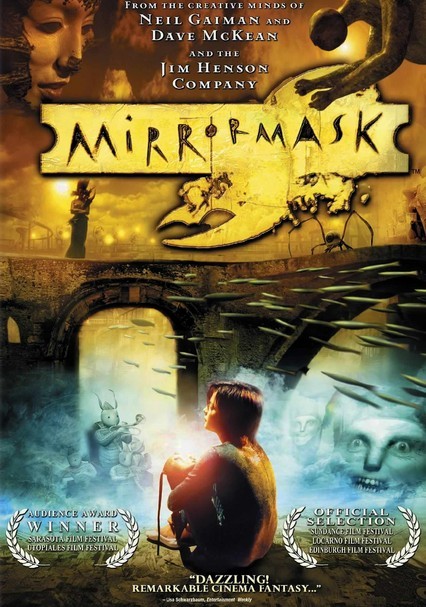 2005 PG 1h 44m Blu-ray / DVD
Screenwriter Neil Gaiman's masterful allegorical drama, which melds live actors with animated characters, portrays the existence of a 15-year-old girl named Helena (Stephanie Leonidas) in a civilization ruled by light and darkness. When the Light Queen loses her equal hold on the kingdom, plunging it into gloomy shadows, Helena takes it upon herself to restore the universe back to its rightful balance. Dave McKean directs.

Parents need to know that although there's some potentially scary creature imagery in this fantastical plunge into a post-modern Wonderland, it's more weird and playfully grotesque than ugly or horrific. A menacing queen who sprouts black tentacles (through her mouth at one point) is the worst of it. Some young viewers may just be more confused about the otherworldly events and warped logic than scared or otherwise upset.

A brief scene of the heroine's alter ego cuddling with a boy (the heroine strongly disapproves).

A few times a creeping darkness turns humans (or humanlike creatures) into statue-like figures who can shatter. But all of the scariness/creepiness is based in fantasy and isn't "real" by a long shot.

Characters are rarely entirely good or evil (not even the tentacled Queen of Darkness), which is a refreshing change from the one-sided morality in a lot of movies -- but a little odd when the heroine is betrayed by a character she thought was her friend, only to have him come crawling back a few scenes later. The heroine is a strong female lead who ultimately makes the right, responsible choices, though there's tacit approval of her being a graffiti artist.

Nothing overt, though the movie does have an overall "trippy," Alice-in-Wonderland-like ambience, and a key clue is the phrase "get higher" (wink wink, nudge nudge).