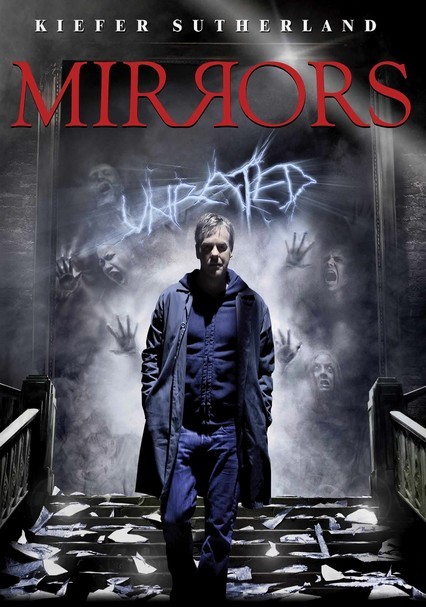 2008 R 1h 52m Blu-ray / DVD
This creepy supernatural thriller from director Alexandre Aja stars Kiefer Sutherland as troubled security guard Ben Carson, a man who discovers malevolent spirits living within the mirrors of a fire-ravaged department store. When their murderous nature comes to light, Ben turns to his estranged wife (Paula Patton) to help him save their family -- and himself. The supporting cast includes Amy Smart and Jason Flemyng.

Parents need to know that this brutal horror movie is graphically, grotesquely, and grimly violent, featuring extensive sequences of special-effects gore. Disturbing, gory images are lingered over, and the film's magical-mirror plotline -- in which mystical reflection images are recreated in the real world -- means that, in many cases, viewers literally get to see the same horrifically violent acts twice. There's also a demonic-possession element to the plot, as well as a bit of sexuality, some strong language, and references to a drinking problem.

Constant, brutal, and explicit violence, including slashed throats (seen repeatedly in close-up and later in photos); knife wounds; flesh wounds from shards of shattered mirrors; drowning induced by unseen supernatural forces (including that of a child); a grotesque special-effects sequence in which a woman's mirror reflection tears her own jaw loose, fatally replicating the grisly wound on her real-life counterpart; a mutilated body is seen floating in a bathtub; a half-naked female burn victim seen crying in agony; several burn victims seen in supernatural visions; a psychiatric patient being manhandled and restrained; corpses being autopsied shown in great detail; a woman cut to bloody ribbons by exploding mirrors; a character battling an elderly demon-possessed woman in intense close-quarters fighting (her demise includes being shot, impaled with a steam pipe, immolated in an explosion, and crushed with falling debris). Children are in peril. Extensive discussion of a fire with dozens of fatalities and a massacre at a hospital which left 15 dead. A nun is essentially kidnapped at gunpoint.

A lead character is a cop who is suspended for accidentally shooting an undercover officer. Lead characters are dealing with a marriage shattered by tragedy; a child overhears his parents arguing. Demonic possession and theological elements are involved in the plot.

A character discusses a problematic history with alcohol, noting that they "haven't had a drink in three months." The same character is using a prescription drug with serious side effects to stop drinking. A scene is set in a bar.