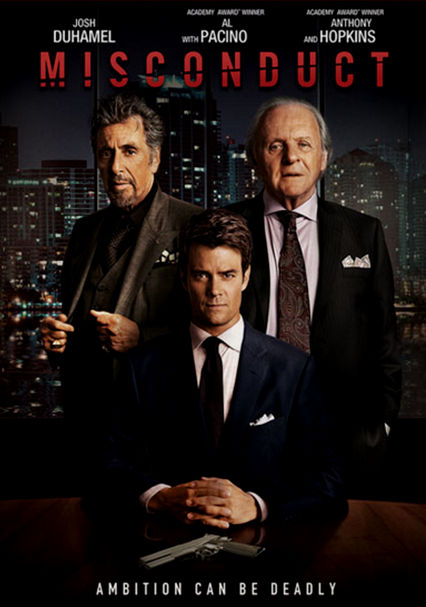 Parents need to know that Misconduct is a crime thriller/legal drama starring Josh Duhamel as an ambitious young attorney whose ex-girlfriend approaches him with whistle-blowing news about a pharmaceutical corporation's billionaire CEO. The twist-filled movie features quite a bit of violence, much of it against female characters, who are beaten, chased, shot, and killed (male characters are, too). There's also a lot of strong language ("f--k," "s--t," "a--hole," "bitch," etc.) and sexual situations that stop just short of actual sex -- including a woman's naked breasts (seen in shadow/dark light). Despite the star-studded cast (Al Pacino and Anthony Hopkins co-star), the dark thriller is unlikely to appeal to most teens.

Brief, silhouetted nudity when a man nearly commits adultery with an ex-girlfriend. They kiss passionately, he spanks her, and she undresses. In addition to seeing her in a bra, in the next scene, her breasts are visible in shadow/dark light.

People are shot at point-blank range. Others die under mysterious circumstances. A man punches another man. A woman is beaten. A corporate assassin threatens and injures people. He nearly runs over a woman on his motorcycle and seriously hurts her. Someone makes a woman in critical condition at the hospital "code" and die.

The truth can be complicated, and couples shouldn't lie to or cheat on each other. Also, apparently, rich folks can easily get out of trouble.

Adults drink at home (occasionally to excess) and in restaurants and clubs. Characters smoke cigarettes.