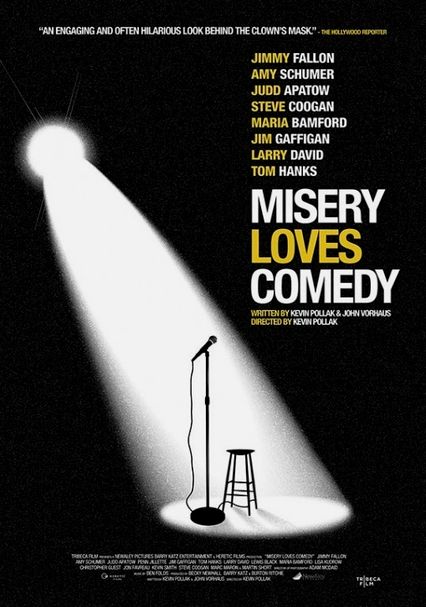 2015 NR 1h 35m DVD
Entertainment industry lore suggests that comics and other funny showbiz folks are often sad or bitter in their personal lives. This engaging documentary explores that belief through candid interviews with Tom Hanks, Martin Short and more.

Parents need to know that Misery Loves Comedy is a documentary about whether comedians must suffer in order to be truly funny. More than 60 comedians, writers, and directors are interviewed on the topic. Language is the biggest issue, with very frequent use of words including "f--k," "s--t," and "d--k." Interviewees also mention their past struggles with drugs and/or make references to drugs, alcohol, and sex. Suicide is discussed. There are so many interviewees that coherent messages may be lost, but overall the movie values truth and honesty, even if it doesn't always paint a pretty picture. Teens interested in becoming performers might learn a few illuminating lessons from the movie.

Discussion of a person who wished to commit suicide but discovered comedy instead.

Honesty is valued, even if what comes out isn't always exactly pretty. But comedy is also sometimes equated with drugs, in that getting laughs becomes like getting high. Teens thinking about becoming entertainers might find some illuminating take-aways here, both encouraging and discouraging.

Some comedians discuss their drug and alcohol use and/or addictions. One interviewee went to rehab and then discovered comedy.