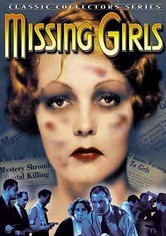 1936 NR 1h 4m DVD
After killing Senator Benson, gangsters kidnap two witnesses to the crime -- Benson's daughter, Dorothy (Muriel Evans), and young runaway Ann (Ann Doran). A shady contact reveals vital information to reporter Dugan (Roger Pryor), who goes undercover as a hobo to rescue the girls. The killer is certain Benson's murder will be pinned on the senator's nemesis, gangster Dan Collins, but Dugan and the FBI are determined to catch the real culprit.