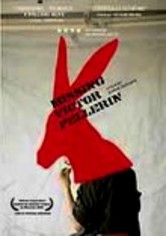 2006 NR 1h 42m DVD
In 1990, charismatic Montreal artist Victor Pellerin abruptly burned all his work and vanished. Fifteen years later, filmmaker Sophie Deraspe set out to investigate his disappearance -- and found an even bigger mystery than she expected. Old friends describe a charming and entertaining figure, but others paint Pellerin as little more than a con man who scammed the entire Montreal art scene, two views that make it hard to say where the truth lies.