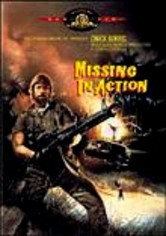 1984 R 1h 41m DVD
Haunted by memories of his tour of duty in Vietnam, retired Army Col. James Braddock (Chuck Norris) joins a delegation returning to the country to negotiate the release of American prisoners of war. But upon his arrival, the communist government betrays Braddock. Armed with heavy duty firepower and a kick-ass attitude, Braddock decides to liberate the detainees himself in this gung-ho action thriller also starring M. Emmet Walsh.