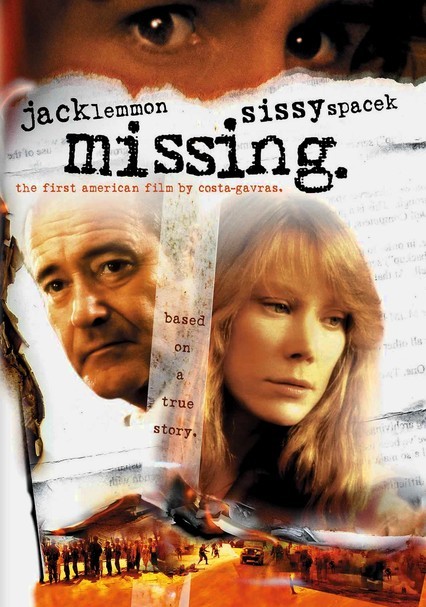 1982 PG 2h 3m DVD
When an American living in South America goes missing, his wife turns to his businessman father for help. But the family soon learns a lesson in political reality ... and the ugly facts about the United States' involvement in Latin America.

Parents need to know that Missing is the story of a father's search for his missing son after a right-wing coup in a South American country. There is violence in the form of gunshots and dead bodies, but unlike most violent films, the violence isn't intended to heighten action, but to underscore the deeper point of human rights abuses in a regime brought to power by the United States. By following Ed's discovery of what his government has been getting up to in a country where his son has been living, American foreign policy and the cruelties of dictatorships are brought into full focus. For parents familiar with American involvement in Latin America during the Cold War (and before), this film should provoke discussion about what government leaders say as opposed to what their governments actually do, and for families unfamiliar with this ugly chapter in South American history, Missing should prove a real eye-opener.

Beth Horman freely discusses the sex life between her and Charles with Charles's father Ed.

The human rights abuses of a right-wing South American dictatorship are graphically presented in this film. The city in which the characters live is filled with the echoes of gunshots. There is blood on the street, dead bodies covered in blood. A dead body floats down a river. In a stadium, dead bodies fill the rooms.

While painting a bleak portrait of American foreign policy and of bureaucracy in general, the film shows perseverance in pursuit of the truth and in the face of tremendous difficulties.

While not promoting these products -- seeing how the film discusses how these corporations played a large role in the CIA-backed coup that placed a right-wing dictatorship in power -- the Texaco, Coca-Cola, and Ford logos are shown prominently.

Characters are shown drinking beer, whiskey, and wine, but do not act intoxicated.