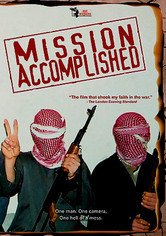 2004 NR 1h 24m DVD
Seven months after President George W. Bush, flanked by a "Mission Accomplished" banner, declared the Iraq war over, British Journalist Sean Langan singularly chronicled events and interviewed parties on both sides of the war. Along with footage of suicide bombers and various battles, Langan's gripping documentary features interviews with both resistance fighters and American Troops, providing a unique perspective of the war from both sides.