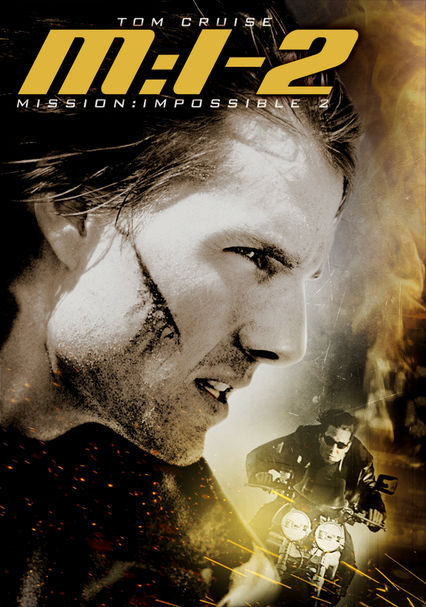 2000 PG-13 2h 3m Blu-ray / DVD
With computer genius Luther Stickell at his side and a beautiful thief on his mind, agent Ethan Hunt races across Australia and Spain to stop a former IMF agent from unleashing a genetically engineered biological weapon called Chimera.

Parents need to know that this second installment in the Mission: Impossible series is as action-packed and suspense-filled as the original film, though it's far more brutal. Characters are dispatched using an amazing assortment of weaponry, skills, and derring-do: knives, automatic weapons, plane crashes, falls from steep cliffs, vicious hand-to-hand combat, martial arts, explosions, flame throwers, and the devastatingly visual of a virus slowly destroying a human body. In most instances, however, an effort is made to keep the gore and carnage off camera, so while bodies fly and things explode, the audience is not exposed to the grisly aftermath. There is some sexuality with kissing, mild foreplay, partial undressing, and post-sexual cuddling. Some swearing ("bitch," "ass," "damn") is heard infrequently.

Playful sexual innuendo when two characters are forced to hide in a bathtub together. Very soon afterward, they kiss passionately, start to undress, then are seen in post-sexual cuddling with only bare shoulders visible. More embraces and kisses follow as the relationship intensifies. It is implied that the film's heroine will voluntarily resume a former sexual affair in order to trap a villain.

Almost continuous action and violence beginning with a harrowing plane crash and explosion in which everyone aboard is killed. That is soon followed by a sequence that shows scary images of cell destruction caused by a deadly virus. The film's hero is a one man army, punching, using martial arts, driving skills, gunfire, and athleticism (including dangling from a sheer precipice) to fend off dozens of villains. Bodies fly; vehicles explode; automatic weapons are fired; a man's fingertip is cut off using a cigar clipper. There are point-blank shootings, flame throwers, lengthy hand-to-hand combat sequences, and high speed chases with careening, crashing vehicles.

The IMF forces with honorable intentions and great courage once again defeat a formidable enemy. Good triumphs over evil.

Bulgari brand is visible. The franchise has a heavy marketing component.