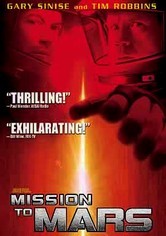 2000 PG 1h 53m DVD
It's the year 2020, and man has successfully landed on Mars. But something goes awry, and all contact with the mission and its commander is lost. Two co-pilots embark on a rescue mission, but what they find is beyond all imagination.

Parents need to know that Mission to Mars is a 2000 Brian DePalma-directed sci-fi movie about a team of astronauts in the year 2020 who land on Mars and make a profound discovery. Characters are in peril and there are a number of tense moments and several deaths. One of the astronauts is blown into pieces by a violent sandstorm. A later death scene in space (a character commits suicide to save the lives of others), might be too emotionally intense for some viewers. There is also some consumerism: M&M's, Dr. Pepper, and Kawasaki products are prominently displayed in important scenes. Profanity includes "son of a bitch," "damn," "goddamnit," "ass."

Characters in peril, some killed. An astronaut is blown to pieces from a violent sandstorm. Weightless blood from a head injury in a spaceship. Suicide.

Profound themes on humanity's relationship to the universe.

M&M's and Dr Pepper products prominently shown in two important scenes. The Martian rover the astronauts use has the Kawasaki logo clearly featured in big letters on its side.