Mitch Hedberg: Mitch All Together 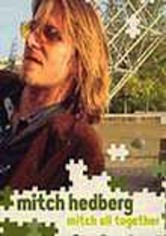 Mitch Hedberg: Mitch All Together

2003 NR 1h 0m DVD
The late off-the-wall stand-up comedian Mitch Hedberg had drawn comparisons to deadpan comic Steven Wright at his drollest and had attracted a huge fan base who grooved to his bizarre musings and one-liners. Get hip to Hedberg's timeless observations and stoner demeanor with this sampling of his best on-air performances, featuring unedited footage from a 1999 "Comedy Central Presents" special recorded at The Palace in Hollywood, Calif.