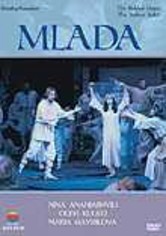 2005 NR 2h 15m DVD
Nina Ananiashvili dances the dual roles of Mlada and Cleopatra in this acclaimed production of composer Nikolai Rimsky-Korsakov's "Mlada," directed by Boris Pokrovsky and choreographed by Andrei Petrov. Voislava, the daughter of a scheming prince, is forced to present his rival's bride with a poisoned ring so Voislava can marry him instead -- and her father can take over his kingdom. Will she get her just desserts when the gods intervene?