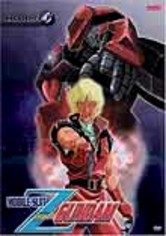 1985 NR 6 discs
Seven years have passed since the end of the One-Year War, and in the interim, the Earth Federation has organized the Titans, an elite fighting force. However, the Titans soon begin committing atrocities on par with the worst the Principality of Zeon perpetrated during the war. In retaliation, disgruntled citizens, former Zeon soldiers and members of the Earth Federal Forces form a resistance group known as the Anti-Earth Union Group.