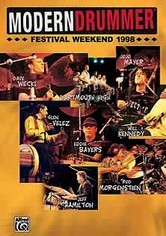 1998 NR 2h 45m DVD
You'll have a front-row seat for one of the most impressive gatherings of master drummers at the 11th Annual Modern Drummer Festival. Filmed over the course of two days in May 1998, the event showcases some of the world's top musicians, with Jeff Hamilton, Will Kennedy, Rod Morgenstein, Glen Velez, Jojo Mayer, Eddie Bayers and Dave Weckl among them. Highlights from the performances and incisive interviews are included.