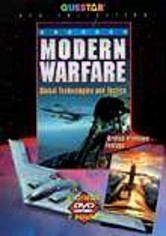 2003 NR 1h 10m DVD
This installment of the Modern Warfare series sets its sights on two conflicts whose far-reaching consequences lasted long after the fighting stopped: The war between Iran and Iraq and Russia's invasion of Afghanistan. In "Iran/Iraq," Iraqi forces invade Iran in 1980 with the expectation of a quick victory, but they're in for a surprise. In "Russia in Afghanistan," Soviet invaders underestimate the resourcefulness of the Afghan guerilla army.