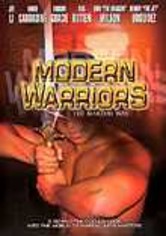 2002 NR 0h 58m DVD
Academy Award-nominated documentary director Peter Spirer spends time with more than 80 of the world's greatest martial artists as they demonstrate techniques and discuss the philosophy behind their craft. Through rare footage and discussions with stars such as Jet Li, David Carradine, Sammo Hung and more, Modern Warriors provides an in-depth look at the martial arts phenomenon and its increasing global popularity.