Modulations: Cinema for the Ear 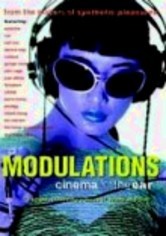 Modulations: Cinema for the Ear

2004 NR 1h 14m DVD
This thought-provoking documentary from director Iara Lee chronicles the evolution of techno and electronica music throughout the 20th century, tracing its origins and early incarnations through rare club and concert footage. Featured performers include Afrika Bambaataa, Moby, DJ Spooky, Kraftwerk and the Prodigy, plus work from modern avant-garde composers such as John Cage and Pierre Henry.