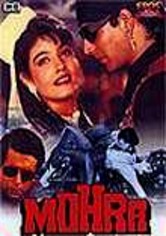 1994 NR 2h 57m DVD
Vishal Agnihotri (Sunil Shetty) has been sentenced to death for killing the four college kids who murdered his wife (Poonam Jhawer) when a journalist (Ravseena Tandon) decides to take his case to a powerful media mogul (Naseeruddin Shah). When the mogul manages to get the case pardoned, a thankful Agnihotri takes on a dangerous mission. Soon, Agnihotri finds himself involved in a risky venture that could land him right back in jail.