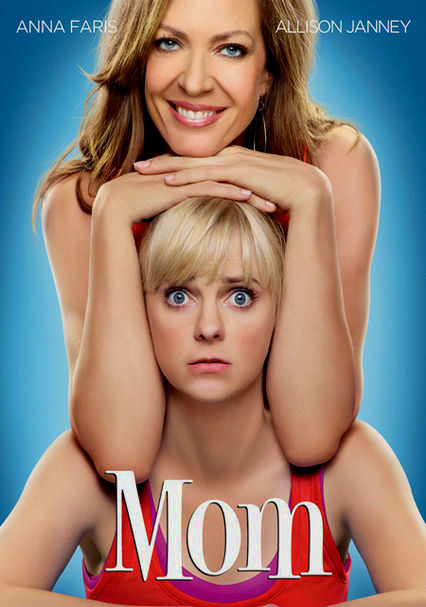 2013 TV-14 1 season
A clean and sober single mom is taking a stab at forging a new life -- and a fresh start -- in California's Napa Valley. But complications arise when her passive-aggressive mother shows up.

Wine-soaked Napa Valley may not seem like the best place for a recovering alcoholic to start life anew, but don't tell that to single mom Christy. She's busy fielding advice from her passive-aggressive (formerly estranged) mom in this brassy sitcom.

Parents need to know that Mom is a sitcom about a clean and sober single mom made by the same comic minds who wrought Two and a Half Men upon the world; expect a similar tone, with frequent jibes about sex and drugs. Main character Christy (Anna Faris) doesn't drink and is shown attending AA meetings, but works in a restaurant where diners drink wine; her teenage daughter drinks and smokes pot (offscreen). Her ex-husband is also a pothead and would-be pot dealer, and her mom is an ex-cocaine user who still takes Xanax when she needs to "calm down." Sex is similarly played for laughs: Christy's teen daughter is sexually active and viewers see a teen boy leaving her room via the window. Viewers will also see adultery and some cartoonish violence.

Christy's mom and daughter are both on the make. Viewers will see flirting and dating and hear references to teen sex, prostitution, and pregnancy. A teen girl sneaks a teen boy into her bedroom; we see him coming out shirtless and bleary.

Christy works in a restaurant where apparently injuries are common in the kitchen: cooks are set on fire and apparently lose fingers; viewers see bloody bandages, played for laughs. One joke concerns a video game in which players beat prostitutes with a bat until they give your money back.

Family love and unity is championed explicitly and implicitly, but characters are more apt to show affection by mocking each other than like conversing as real people. Drugs, alcohol, casual sex, teen promiscuity are all fodder for jokes.

Frequent references to drugs. Christy's teen daughter Violet drinks and smokes pot and one character tries to acquire pot to sell it. Christy says "I need a drink!" (though she is sober) and her mom advises her to take a Xanax to calm down.