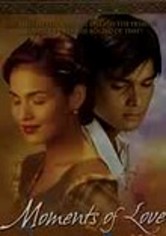 2006 NR 1h 44m DVD
Marco (Dingdong Dantes) has found the perfect girl in Divina (Iza Calzado). Though they've only spoken on the phone, they're convinced they're meant to be together. One problem: Divina's living in 1957 and Marco in 2006. If these two are going to be together, they'll have to bend time and space to do it. Directed by Mark A. Reyes, this fantastical romance also stars Paolo Contis, Karylle, Chinggoy Alonzo and Jojo Alejar.