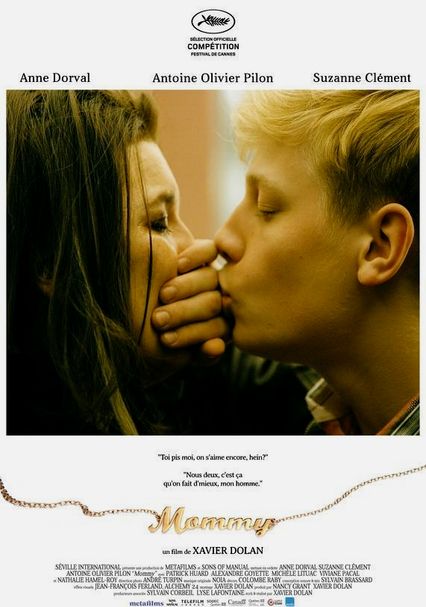 2014 R 2h 14m DVD
Diane Després is a flamboyant middle-aged widow and mother to Steve, an adolescent with severe emotional and behavioral problems. As Diane struggles with Steve's radical mood swings, she begins receiving help from a solicitous new neighbor.

Parents need to know that Mommy is an intense, heart-rending depiction of the relationship between a widowed mom and her severely challenged young teen son, diagnosed with ADHD and an attachment disorder. A French-language film with English subtitles, the story takes place in Quebec. Profanity is rampant from beginning to end. Countless use of obscenities such as "f--k," "d--k," and "c--ksucker" is augmented by endless bouts of name-calling and swearing ("bitch," "s--thead, "dimwit," "idiot," "faggot," "jerk-off," and the "N" word). Underlying the story is a constant sense of impending violence and/or sexual menacing which could, and often does, erupt uncontrollably. Steve threatens, attacks, chokes, and fights with a number of men and women (including his mom) who either are trying to subdue him or are angrily reacting to his antisocial behavior. Characters smoke and drink throughout, sometimes to excess. (Spoiler alert: One sequence shows the bloody aftermath of a suicide attempt.) A disturbing but humanizing look at tragic circumstances for which there are no easy answers, this film is for mature teens and adults only. Mommy received the Cannes Festival Jury Prize in 2014, as well as many other international awards.

Mood of film implies underlying violence that may erupt at any moment and often does. Uncontrollable impulses in many sequences show enraged teen choking, pushing his mom; menacing, assaulting, chasing, and threatening others. Violent scenes: a car accident, a ferocious struggle between boy and three men, a bar fight in which boy wields a broken bottle, and (spoiler alert) the bloody results of an attempted suicide.

Sadly illustrates the lack of solutions or services for severely mentally challenged children or teens and their parents. Shows fear as a driving force behind violent behavior. Portrays the fragile nature of a parent-child relationship that strives for boundaries, respect, and well-being in the face of insurmountable difficulties. Reinforces adage "Loving people doesn't save them; love is not enough."

Drinking, some drunkenness, including mother allowing son to consume wine. Mother appears to use alcohol as a means of coping with her problems: laces coffee with it, drinks openly and often. Smoking throughout.