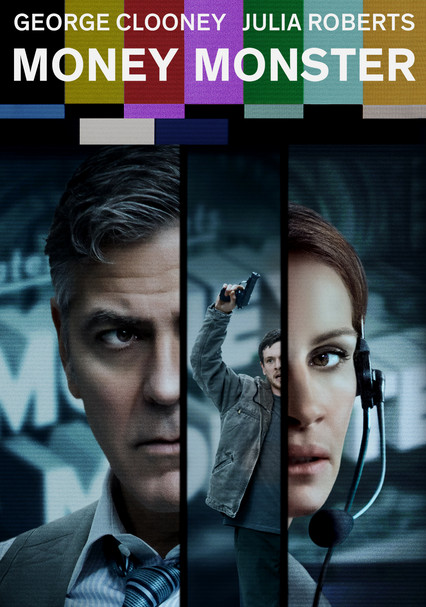 2016 R 1h 38m Blu-ray / DVD
Landing in dire financial straits after following a stock tip from bombastic TV persona Lee Gates, fuming Kyle Budwell takes the lout hostage on live television and threatens to kill him unless he turns the stock price around before the closing bell.

Parents need to know that Money Monster is a hostage story crossed with a "media circus" story. It has some violent scenes: There are guns and shooting, characters are wounded and killed, and blood is seen. There are other brief violent images, too, plus the threat of explosives. Language is strong but not constant, with uses of "f--k," "s--t," "c--k," "bitch," and more. A secondary character tries out an "erection cream" and has sex with a woman backstage; they're covered by clothes, but the scene is still pretty graphic. Minor characters snort cocaine and smoke pot briefly. Though it's not a movie that's likely to stick with you, it does showcase bravery, empathy, and honesty.

A secondary character tests an "erection cream." He has standing-up sex with a woman; both are covered with clothing, but it's still graphic.

Guns and shooting. Characters are shot; some are wounded, some killed. Some blood shown. Threat of explosives. Someone is hit in the head. Images of a violent miner's strike in South Africa. Image of a woman in an old movie wielding an ax, plus other semi-violent images from old movies.

Encourages honesty in admitting wrong. Also encourages helping the downtrodden, especially if you've never really considered them before. Encourages sympathy for angry, frustrated people who've suffered hard times. Rewards the brave and the helpful while punishing the greedy and cowardly.