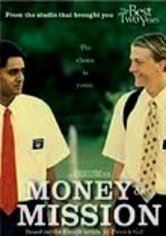 2006 G 0h 33m DVD
Just as Patrick Gill (Nick Whitaker) is preparing to serve a mission, he's offered his dream job: managing a local skateboarding park. Now, he must decide between an obligation to his faith and his love for skating. Written and directed by John Lyde (Take a Chance), this inspiring movie is based on an article by the same name published in &NFiEnsign&NFi_; magazine. The 35-minute film also stars Sheryl Lee Wilson, Rick Macy and J. Dhylan Meyer.