Monkey Monkey Bottle of Beer, How Many Monkeys Have We Here? 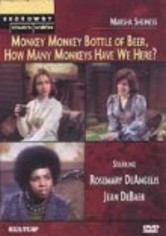 Monkey Monkey Bottle of Beer, How Many Monkeys Have We Here?

1974 NR 1h 30m DVD
Five mothers sit anxiously in a hospital waiting room to reunite with their children, who have been participating in an experimental procedure for two months, in this unsettling Broadway Theatre Archive production from the 1970s. Tension drives the action in Marsha Sheiness's play, which takes its title from an obscure nursery rhyme and never reveals the true nature of the experiment. Rosemary De Angelis and Jean De Baer star.