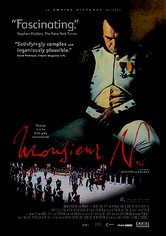 2003 NR 2h 7m DVD
Exiled French dictator Napoleon Bonaparte, aided by an American pirate and a former general in his Grand Army, is hatching a plot to escape the confines of his prison island, St. Helena. Meanwhile, a young English officer arrives on the island to keep a close watch on the military genius who also happens to be his idol. Co-stars Jay Rodan and Richard E. Grant.