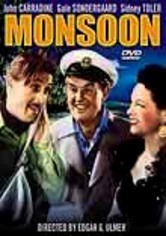 1943 NR 1h 21m DVD
At a South Seas club called the Isle of Forgotten Sins, a shocking murder prompts proprietor Marge (Gale Sondergaard), her diver boyfriend (John Carradine) and his sidekick (Frank Fenton) to set sail in search of a sunken treasure of gold worth $3 million. While double-crossing abounds, a massive monsoon looms on the horizon. The romantic adventure also stars Sidney Toler as Krogan, a crafty former captain who also has his eyes on the prize.