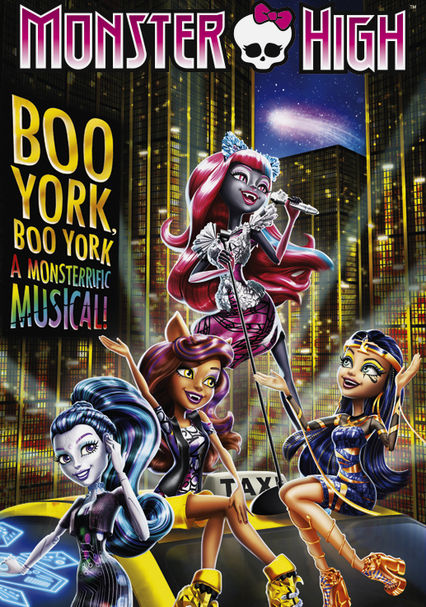 2014 NR 1h 30m DVD
While attempting to help Frankie Stein learn more about her freaky cool scaritage, the fashionably fierce ghoulfriends travel back in time to the first day ever of Monster High! There, they meet Sparky, a skullastic teen with an obsession for creating life. But when Sparky follows the ghouls through a killer time portal to modern-day Monster High, the event results in eight of them fusing together into four creeperiffic hybrid Monsters.

Parents need to know that Monster High: Boo York, Boo York, billed as the first Monster High musical, is indeed filled with contemporary music -- rock and rap accompanied by the doe-eyed, curvaceous gang dancing up a storm. Though there are still some of the usual positive messages and observations about diversity, music takes center stage here, alongside a multi-threaded plot with some mild suspense and mustache-twirling villains. Cleo De Nile's dad and sister lead the ghouls into an adventure in Boo York, Boo York, which looks awfully like a New York City populated by comic monsters and pun-filled landmarks. And, of course, shopping and dressing for a gala event is a big-city must! This release is tied to a major marketing campaign introducing a profusion of new character dolls and toys, as well as brand-new looks for the regulars. In addition, a CD is for sale, described as "an original motion picture soundtrack."

Promotes being true to oneself and "finding your own music." Values living up to one's potential rather than aspiring to material goods and status.

Boo York, Boo York is being released with a substantial number of new products; marketing is heavy. Advertised as the "first" Monster High musical; a CD soundtrack has been released as well. Several new dolls are introduced, and established dolls are available outfitted in their Boo York costumes.