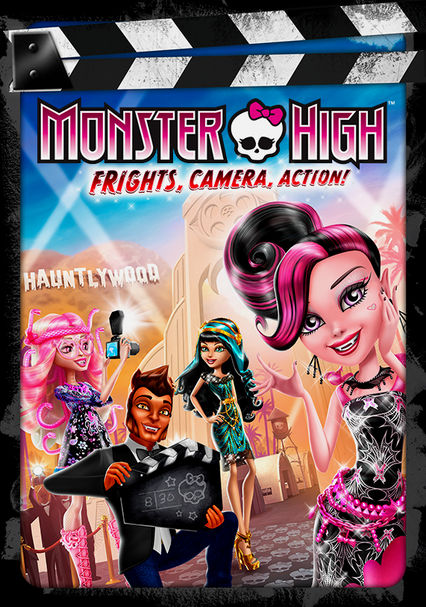 2014 NR 1h 14m DVD
When Draculaura is led to believe she's the rightful heir to the vampire throne, she and her best ghoulfriends are whisked away to Transylvania for a royal coronation to die for. But they soon discover the hunt for the queen is not over yet.

Parents need to know that Monster High: Frights, Camera, Action! is a movie based on the Mattel toy line of adolescent monster dolls, books, games, and other merchandise -- as well as TV specials and a web series. Because they're high school students, some of the Monster High characters are preoccupied with celebrity crushes and have boyfriends/girlfriends. Several times, someone says a celebrity is "hot," and the couples hold hands, hug, and briefly kiss. The language is fairly mild but does include some name-calling like "stupid," "cray-cray," "loser." Parents concerned with unrealistic body issues may not appreciate the way the Monster High characters are mostly tiny-waisted waifs with perfect hair, big eyes, and noticeable makeup or super handsome jock-ish looking guys.

Although they are made to look attractive, these characters are still monsters and may frighten or confuse very young children. The interim head of the vampires is greedy and tries to force Draculaura to marry him.

These characters are all about teamwork, friendship, and inclusion. They don't discriminate against one another based on what kind of monster they are or what they look like.

This movie is based on a toy line from Mattel, and the characters have previously starred in TV specials, movies, and a web series. There is also an accompanying set of books about the doll characters written by Lisi Harrison.