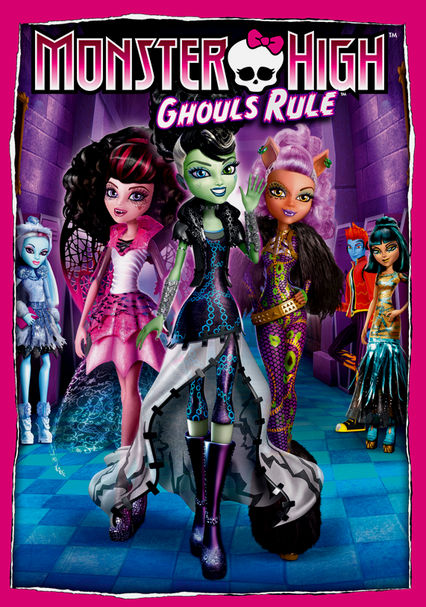 2012 NR 1h 12m DVD
After learning that monsters and "Normies" once celebrated Halloween together, Frankie Stein and her fashionable friends at Monster High decide to rally both groups for a frightfully good time.

Parents need to know that Monster High: Ghouls Rule is inspired by a toy line from Mattel, so there's a strong marketing tie-in to consider for kids. The movie's messages about diversity, battling stereotypes, and overcoming differences are unmistakable, and the colorful cast of monsters and ghouls reference lore about vampires, werewolves, and other creatures of the dark. Even so, there's nothing frightening about the movie or its friendly stars, so it's a viable option for kids who aren't quite ready for the scary stuff. Parents' biggest concern is likely to be what the female characters' twiggy, doe-eyed, made-up appearances say about body image, but if your kids (and you) can see past the exterior, they'll find a surprising diversity of personalities and positive traits like compassion, determination, and intelligence among the cast.

Romantic relationships exist among the teens but on a fairly innocent level. Physical contact is limited to hand-holding and hugs. Girls dress in short skirts, tight tops, and teetering heels, and their movements are designed to draw attention to the curves in their twiggy physiques.

Some peril, and an instance of a flying meat cleaver whizzing past a girl's head, but no injuries.

The story explores the effects of bigotry and making assumptions about a person's character based on his or her appearance. The characters learn to dismiss longstanding prejudices and relate to others based on commonalities. Peer pressure, family relationships, fitting in with peers, and bullying arise in the content, not always with positive outcomes. The movie's message to young girls about body image is its biggest problem, thanks to teens who flaunt lanky bodies that meet unrealistic specs.

This movie is based on a merchandise line from Mattel, and the characters have previously starred in movies and webisodes. Teens -- and girls especially -- are attached to their cell phones and mention "Critter," which it's implied is a nod to Twitter.