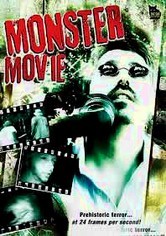 2008 NR 1h 15m DVD
An ordinary camping trip turns into a horrifying nightmare when four friends, armed with a 16mm camera, uncover the existence of a race of giant, reptilian monsters that emerge from a nearby lake to terrorize the residents of a small town. Brothers Mark and John Polonia direct and star in this campy, shoestring-budgeted horror-thriller that draws undeniable influence from the independent film sensation, The Blair Witch Project.