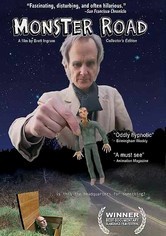 2004 UR 1h 20m DVD
Brett Ingram's award-winning documentary explores the world of legendary claymation filmmaker Bruce Bickford, the eccentric animator who became an international sensation following his collaborations with musician Frank Zappa in the 1970s. Using home videos, interviews and footage from several of Bickford's never-before-seen productions, Ingram paints a portrait of an artist noted as much for his iconoclastic worldview as he is for his art.