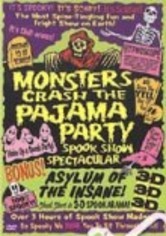 1965 NR 3h 34m DVD
A group of sorority girls undergoes an initiation by spending the night in a haunted house, unaware that a mad scientist is conducting gruesome experiments in the basement. The beauties are abducted and left to hope that their boyfriends will come to the rescue. This campy comedy-horror film was originally part of a live show in which actors "escaped" from the film to nab victims from the audience. Vic McGee and James Reason star.