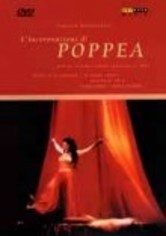 2000 NR 2h 30m DVD
For this spectacular 1993 French production, Baroque music authority Rene Jacobs reconstructs one of the world's first operas, "The Coronation of Poppea," written in 1642 by Claudio Monteverdi and subsequently destroyed in a fire. Patricia Schumann, Richard Croft, Jeffrey Gall and Kathleen Kuhlmann star in this version, which follows the trials and triumphs of Poppea Sabina, Roman empress and cunning wife of the notorious Nero.